Film screening of “The Black Power Mixtape, 1967-1975” (Hugo Olsson, 2011). How does the rest of the world understand black American struggles for rights? This film mobilizes a treasure trove of 16mm material shot by Swedish journalists who came to the US drawn by stories of urban unrest and revolution. Gaining access to many of the leaders of the Black Power Movement—Stokely Carmichael, Bobby Seale, Angela Davis and Eldridge Cleaver among them—the filmmakers captured them in intimate moments and remarkably unguarded interviews. Thirty years later, this lush collection was found languishing in the basement of Swedish Television. 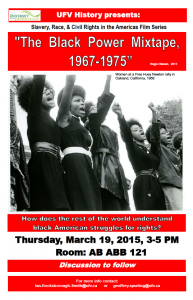