Why is affirmative action so controversial in multi-racial Brazil?

Third film in the series “Slavery, Race, and Civil Rights in the Americas”

From the PBS Wide Angle website:
About the Film
“Am I black or am I white?” Even before they ever set foot in a college classroom, many Brazilian university applicants must now confront a question with no easy answer. BRAZIL IN BLACK AND WHITE follows the lives of five young college hopefuls from diverse backgrounds as they compete to win a coveted spot at the elite University of Brasilia, where 20 percent of the incoming freshmen must qualify as Afro-Brazilian. Outside the university, WIDE ANGLE reports on the controversial racial debate roiling Brazil through profiles of civil right activists, opponents of affirmative action, and one of the country’s few black senators.
http://www.pbs.org/wnet/wideangle/episodes/brazil–%E2%80%90in–%E2%80%90black–%E2%80%90and–%E2%80%90%20white/introduction/965/ 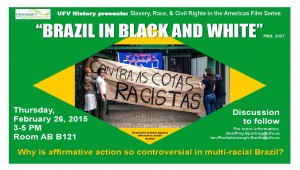