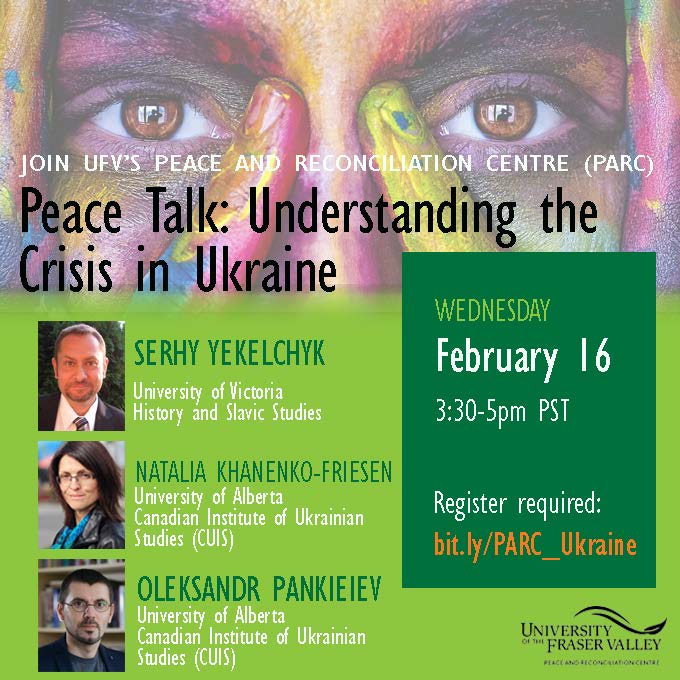 Perhaps nowhere in the world are local and global geopolitics mixing to create as volatile a situation as in Ukraine. Situated between Vladimir Putin’s re-surgent Russia and a NATO that in recent years seems to have lost its collective sense of purpose, Ukraine is quite literally a country in the middle. Since its emergence as a modern nation state following the fall of the Soviet Union the people of Ukraine have struggled with internal crisis and external threats. Today, as was the case so many times in the past, powerful external forces are seeking to chart Ukraine’s course. To help us understand these issues we have pulled together three of Canada’s leading Ukrainian experts.

Prof. Khanenko-Friesen is an anthropologist/folklorist whose research focuses on the Ukrainian diaspora. As Director of the CIUS she oversees and facilitates a wide range of academic and cultural activities relating to the history, culture, and society of Ukraine and Ukrainian Canadians. She has published five books, 12 book chapters, and 17 articles, relating to Ukraine and post-soviet Europe, among which is her 2015 book with the University of Wisconsin Press, Ukrainian Otherlands: Diaspora, Homeland and Folk Imagination in the 20th Century. As a professor in the Department of Languages and Cultural Studies she teaches courses on contemporary approaches to folklore and on Slavic studies.

Dr. Oleksandr Pankieiev, Research Coordinator and Editor-in-Chief of the Forum for Ukrainian Studies at the Canadian Institute of Ukrainian Studies, University of Alberta.
In addition to his role at CIUS, Dr. Oleksandr Pankieiev serves as the President of the Alberta Society for the Advancement of Ukrainian Studies and as the Vice President of the Alberta Local and International Education Association. His main research interests include the history of Stepp (Southern ) Ukraine, Russia-Ukraine relations. He is also pursuing research in the Ukrainian Canadian diaspora studies, ethnography and digital humanities. He is the author of the three historical sourcebooks many articles on related topics. The most recent of his publication is the edited collection “Meandering in Transition: Thirty Years of Reforms and Identity in Post-Communist Europe”, which he co-edited with Dr. Ostap Kushnir. The book was published in 2021 by Lexington Books.

Prof. Serhy Yekelchyk, Cross appointed between the departments of History and Slavic Studies at the University of Victoria; current president of the Canadian Association for Ukrainian Studies. Born and educated in the Soviet Union, Serhy Yekelchyk obtained his Ph.D. from the University of Alberta. He is the author of seven books on modern Ukrainian history, Stalinism, and Russo-Ukrainian relations including the award-winning Stalin’s Citizens: Everyday Politics in the Wake of Total War (Oxford University Press, 2014). Yekelchyk’s most recent publication is Ukraine: What Everyone Needs to Know (Oxford University Press, 2020)—the second, much expanded edition of his popular book about the Euromaidan Revolution and Russian aggression in Ukraine.

Please register for this event through Zoom.