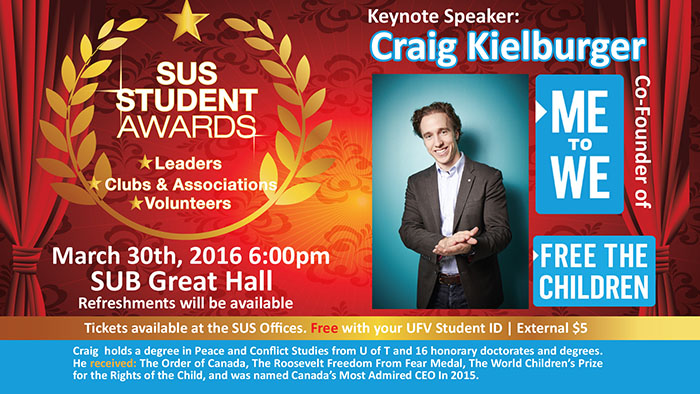 The Student Union Society Awards Night recognizes excellence in leadership and volunteerism by individuals and by clubs and associations.

The UFV Student Union is excited to welcome Craig Kielburger as the keynote speaker for the SUS Awards & Volunteer Recognition Night on Wednesday, March 30.  Craig is an internationally acclaimed speaker, social entrepreneur, and New York Times bestselling author who will speak on ME to WE: How one person can make a world of difference.

Craig co-founded Free The Children in 1995 at the age of 12, which has grown to involve over 2.3 million young people in its programs each year.  He also co-founded ME to WE an innovative social enterprise that supports the work of Free The Children by providing socially conscious products and experiences.  Every year 200,000 students earn their free ticket through service projects to attend 14 We Day stadium celebrations.

Craig’s work has been featured with multiple appearances on The Oprah Winfrey Show and 60 Minutes, as well as in National Geographic, TIME, and The Economist. He’s also been a panelist on CBC’s Canada Reads.

His talk will highlight the power of youth and students, and will include how to:

Craig holds a degree in peace and conflict studies from the University of Toronto and is the youngest-ever graduate of the Kellogg-Schulich Executive MBA program. Voted by Canadians in a Reader’s Digest poll to be one of Canada’s most trusted influencers, he holds 16 honorary doctorates and degrees, and has received the Order of Canada, the Roosevelt Freedom From Fear Medal, and the World Children’s Prize for the Rights of the Child. In 2015, he was named Canada’s Most Admired CEO, together with his brother, Marc.

Tickets are available for FREE at the SUS Office (SUB 1109 and CEP 1422) for students.  Non-students can purchase tickets for $5.

The Student Union Leadership Award recognizes a student leader who has been integral to enhancing the UFV community. Whether through collaborative programming, academic support, international integration, or a multitude of other avenues, the recipient will have steered their teams towards their goal. Leaders are not only those called ‘President’ or ‘Manager;’ leadership is shown through action, not by title, and those actions are what this award recognizes. Note: Leadership roles may be paid or unpaid, however paid leadership contributions will be considered only if the position is restricted to current students (work study, RAs, etc.)

The Student Union Volunteer Award highlights an exemplary student volunteer within UFV. Volunteers are the backbone of all student effort on campus, and the dedication exhibited by some of these volunteers is unparalleled. The recipient may be running tours at New Student Orientation, or quietly working before an event decorating the venue. Regardless of their duties, the recipient will have shown their utmost commitment to the task, going above and beyond what was required.

The Student Union Club or Association Award honours a student group that has fulfilled their mandate and improved the experience at UFV for members and/or the broader student body. Student groups manage a diverse array of events, programming, support, and volunteerism in all aspects of the student community. The recipient will have built community within their field and/or UFV, and provided opportunities for students to further their interests and support fellow students or others within the mandate of the group.