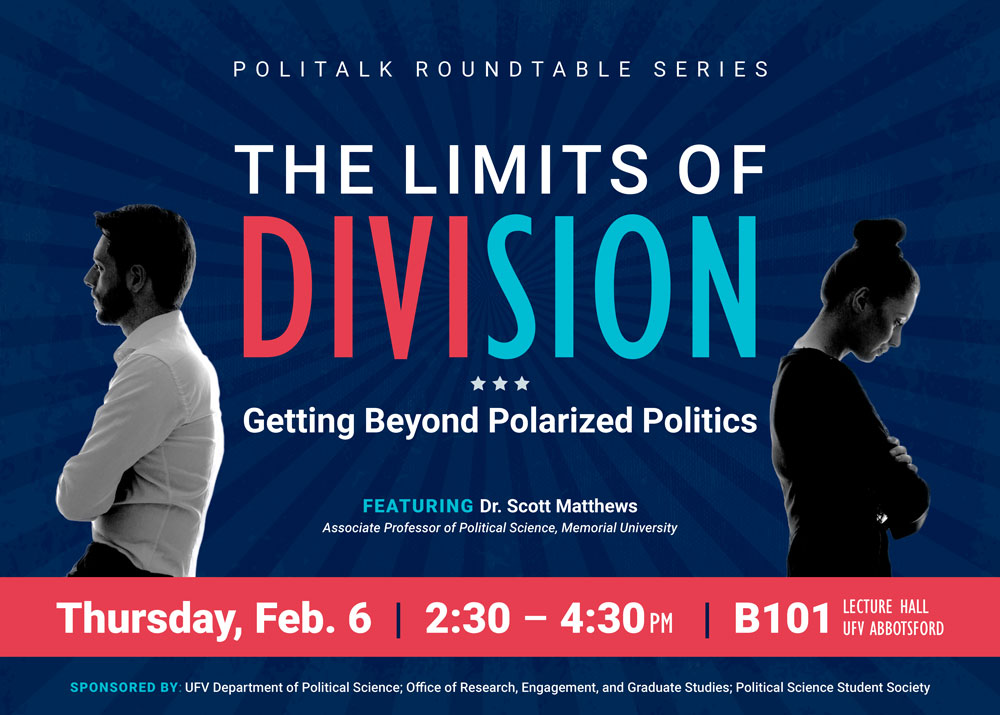 The Limits of Division: Getting Beyond Polarized Politics
Free public talk by Dr. Scott Matthews, associate professor of political science at Memorial University

It is commonplace that the politics of many established democracies have become increasingly polarized. But what does polarization really mean, and what do we know about its sources and effects? Most importantly, can we get beyond polarized politics? In this talk, Dr. Scott Matthews will briefly review evidence of polarization in Canada and the U.S., and then focus on theory and research that points to conditions that seem to limit, and may even counteract, the trend toward political polarization.

Scott Matthews (PhD, UBC) is an associate professor of political science at Memorial University. He studies public opinion and voting behaviour in Canada, the United States, and other established democracies.

Matthews has particular expertise in regards to public policy attitudes and political persuasion and has published widely on these topics in leading political science journals, including the American Journal of Political Science and the British Journal of Political Science. He was a collaborator on the 2011 and 2015 Canadian Election Studies and is an academic co-applicant on the Consortium on Electoral Democracy (C-Dem).

Matthews is a past director of the Canadian Opinion Research Archive data centre at Queen’s University (2011-2016) and has held the Fulbright Visiting Research Chair at Vanderbilt University (Nashville, TN) and a Humboldt Research Fellowship at the University of Mannheim (Germany). His first faculty appointment was as an assistant professor at Queen’s University, where he was tenured and promoted to associate professor.

The Limits of Division: Getting Beyond Polarized Politics – Public Talk by Dr. Scott Matthews