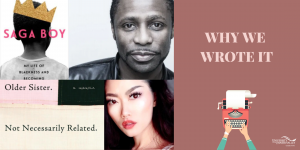 Why We Wrote It

A Reading and Conversation with Acclaimed Memoirists

Jenny Heijun Wills is a Canadian writer, whose memoir Older Sister, Not Necessarily Related won the Hilary Weston Writers’ Trust Prize for Nonfiction in 2019. Her book was also named as one of the Globe & Mail’s “100 Books that Shaped 2019”, the CBC’s “Best Canadian Non-Fiction of 2019”, and Adoptee Readings’ “100 Adoptee-Authored Books from the Decade”. She teaches writing and critical race studies in literature at the University of Winnipeg.

Antonio Michael Downing is the author of Saga Boy. He grew up in southern Trinidad, northern Ontario, Brooklyn, and Kitchener. He is a musician, writer, and activist based in Toronto. His debut novel, Molasses, was published to critical acclaim. In 2017, he was named by the RBC Taylor Prize as one of Canada’s top emerging authors for nonfiction.

Register for this event