We cordially invite you to join us at the premier launch of the film. 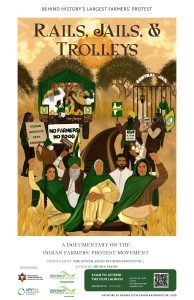 “Rails, Jails and Trolleys” documents history’s largest farmers’ protest and the Canadian diaspora’s response to it. This ground breaking documentary captures the electric ethos of a protest that received international attention and the resounding response by Canadians to the movement. A full year in the making the film tells the story of why and how the farmers’ movement ignited a nation, and youth, women and men from all over the world.

Directed by young filmmaker Ms. Henna Mann and produced by the South Asian Studies Institute at the University of the Fraser Valley, this film is a “must see” event in BC for the summer of 2022.