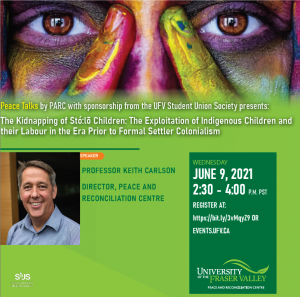 The Kidnapping of Sto:lo Children: The Exploitation of Indigenous Children and their Labour in the Era Prior to Formal Settler Colonialism

In this presentation Dr. Keith Carlson takes people on a journey into the past where we learn about the exploitation of Indigenous children and their labour in the era immediately prior to formal settler colonialism. He will also discuss some of the remarkable stories of family love and resilience. — While we have come to know about the tragic stories of missing and murdered Indigenous women and girls, the 60s scoop, and residential schools, most people are unaware of the even earlier history of the kidnapping of Coast Salish Indigenous children. In this presentation Dr. Carlson will discuss the deeper history of child vulnerability by going back to the late eighteen century – an era when Spanish officials and enemy coastal raiders alike took dozens of Coast Salish children away from their homes. This was followed by the fur trade era when the HBC exploited Coast Salish child slave labour. And then in 1858 when Hope became the centre of an international kidnapping crisis where American miners stole dozens of Stó:lō boys and took them to California.

The event is open to everyone in the UFV Community.

Keith Thor Carlson holds the Canada Research Chair in Indigenous and Community-engaged History at the University of the Fraser Valley, where he has additionally been appointed Director of the new Peace and Reconciliation Centre. He has been working with Coast Salish Knowledge Keepers since 1992. Individually or with partners Carlson has authored or edited eight books and over 50 articles. His scholarship has been translated into three languages, transformed into video documentaries and works of public art, and found expression in expert witness legal reports. Carlson was made an honorary member of the Stó:lō Nation in 2001, and was appointed a member of the Royal Society of Canada’s College of New Scholars in 2017.

In honour of National Indigenous History month, the UFV Student Union Society would like to acknowledge and help bring awareness to our Indigenous history and to celebrate and support Indigenous peoples and their culture. Within this event, students will have the opportunity to listen to an in-depth presentation by Dr. Keith Carlson while also coming together as a community to have open conversations around these important topics.

The Kidnapping of Sto:lo Children: The Exploitation of Indigenous Children and their Labour in the Era Prior to Formal Settler Colonialism